By Sangita Kasturi and Jami Donohue
Driving to work recently, we found ourselves on speaker phone, recalling the places we had worked that were particularly good at engendering trust, fostering collaboration, driving innovation and managing risk. “There can’t possibly be that many places like that,” you may be thinking. And you’re right. Trust. Risk. Collaboration. Innovation. All of these go hand-in-hand and their abundance – or dearth – reflects an organization’s culture.All too often, organizational culture is created by accident – a jumble of publicly stated imperatives that are out of sync with the way work really gets done and what is truly rewarded in an organization. We call this an “accidental culture” as opposedto an “intentional culture” which is deliberately created to further an organizations values, goals and capabilities. 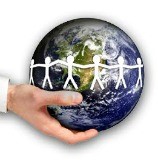 to reflect on how work actually gets done, how decisions are made, what gets rewarded and who gets promoted. In other words, few take the time to grasp and articulate the true culture of their organizations.

It is important to note that we are not suggesting that leaders embark on a mission to drastically change the cultures of their organizations – this would be too difficult and may not even make sense. Rather, we are asking leaders to think about the extent to which their key players have a realistic understanding of the culture that is already in place. The decision to make cultural changes is then based on whether business goals are being met and whether cultural shifts are needed in order to meet those goals. Both John Kotter and  Edgar Schein write extensively about this.

True culture defines the extent to which diversity is valued, how failures are managed and what behaviors are rewarded. More often than not, an organization’s culture comes into existence accidentally and seldom aligns with the way the organization describes itself through publicly stated values and mission statements. 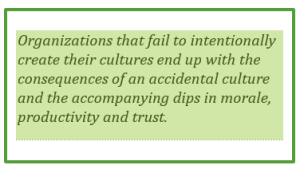 While some leaders do deliberately set the tone and build an intentional culture that trickles down through the organization, most have not examined the extent to which the true culture of their organizations aligns with the publicly stated culture. If they have done so, then it is likely that they have not effectively addressed any misalignments between the two.

For example, an organization that outwardly says it values innovation, but in reality shows little tolerance for risk – a key ingredient of innovation – suffers from a mismatch between its true and stated culture. This “accident” can be rectified only after it has been acknowledged, and when leaders become clear and intentional about shaping the culture. Organizations that fail to intentionally create their cultures end up with the consequences of an accidental culture and the accompanying dips in morale, productivity and trust.

So why do so many companies fail at creating the culture they talk about?

What Gets Rewarded Gets Done

Open acknowledgement of the gaps between true and stated culture, courageous conversation 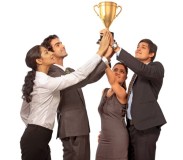 around why those gaps exist and deliberate action to narrow the gaps can help avoid a tumble into an accidental culture that ultimately may not be what the company wants. It is the onus of top leaders to be aware of which behaviors, people and attitudes they actually reward because this information enables them to intentionally define their organizational culture.

Most organizations want a culture in which:

Don’t find yourself in an “accidental culture.” As a leader, it is up to you to demonstrate courage and take action when there is a misalignment between the culture you want and the one that you have. Create your company’s culture purposefully and intentionally and watch morale escalate, talent thrive and innovation take root as never before.

← Video: Unconscious Bias
Why Gender Equality Needs to Include Men →